According to researchers at the University of Virginia, children who suffer from a sleep disordered breathing condition are likely to suffer intellectual impairment similar to that caused by lead poisoning.

An article on www.MedicalNewsToday.com says:

UVa researchers have been studying sleep disturbances in children with enlarged tonsils and adenoids for the past seven years. In a recent study, they discovered that youngsters who snore nightly scored significantly lower on vocabulary tests than those who snore less often.

child’s IQ and the strongest predictor of academic success,” explains Dr. Paul M. Suratt, a pulmonologist who directs the UVa Sleep Laboratory. According to Dr. Suratt, the vocabulary differences associated with nightly snoring are equivalent to the IQ dissimilarities attributed to lead exposure.

“Studies show that, even at nontoxic levels, lead exposure can reduce a child’s IQ by more than seven points,” he notes. Sleep disorders can be intellectually and behaviorally detrimental to children because they interrupt the deep sleep patterns needed for healthy development. At night, children with sleep disorders can be observed snoring, snorting, gasping, tossing and turning. During the day, these children can be irritable, hyperactive and unable to concentrate.

A key goal of the UVa researchers is to predict which children with sleep disorders are most likely to suffer cognitive impairment or develop behavior problems.

In a series of studies involving six to twelve-year-olds, researchers have been piecing together a list of risk indicators. So far, snoring frequency combined with sleep lab results have proven to be the most reliable predictors of intellectual impairment and behavioral problems.

Sleep duration and race appear to be important risk factors, too. “One of our most recent studies found that kids who snore nightly and spend less time in bed score significantly lower on cognitive tests than children who snore less frequently and spend longer times in bed,” Dr. Suratt explains. “We’ve also found that obstructive sleep disordered breathing (OSDB) occurs more often in African American children and, therefore, places them at greater risk of cognitive impairment.”

As part of their quest to accurately identify at-risk children, UVa researchers are now testing a device that records breathing sounds during sleep at home. When used in the lab, this method has proven more sensitive than existing equipment in detecting sleep apnea in children. “We’re getting closer to the day when we can quickly establish risk profiles and effective treatment plans for children with sleep disorders. Our goal is to minimize the cognitive and behavioral problems that often develop,” says Dr. Suratt.

For more information about snoring and related sleep disordered breathing conditions such as sleep apnoa, contact us on 1300 246 637 or on the form via our 'Contact Us' page.

The Sydney Morning Herald recently a well written and wide ranging article on snoring and sleep apnoea, titled ‘To Sleep Perchance To Sleep’, by Steve Dow.

The article provides a good insight into the life of a person with a severe form of sleep disordered breathing, with some disturbing descriptions of the impacts the conditions can have.

Amongst other things, Dow refers to a 2005 Yale University study which found sleep apnoea doubled the risk of stroke and death.  His article also mentions some of the social / economic consequences – i.e., loss of employment and loss of drivers licence as a result of an untreated SDB condition.

Dow demonstrates this important point when he reports that recent media attention has researchers worried that sufferers may not come forward for treatment, fearing a stigma.   He cites the case of Judge Dodd, the NSW District Court judge who was forced into retirement after the NSW Judicial Commission deemed him medically unfit following an investigation into accusations the then 57-year-old had fallen asleep during evidence in a rape trial.

A well written article in The Scotsman provides a comprehensive summary of the prevalence and common effects of snoring, with particular reference to its impact on relationships.

According to the article, 48 per cent of snorers believed snoring had adversely affected their relationship with their partners with 10 per cent admitting they have considered living separately or splitting up because of the problem. 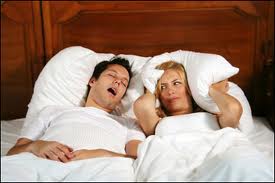 The article also looks at some of the most commonly available treatments for snoring — from surgical intervention to over-the-counter remedies — with some reviews of different snoring remedies at the end of the article.

A weak point in the article is that it does not point out the common connection between snoring and sleep apnoea.

As discussed in our recent post, “Why Sleep Studies Are Necessary Before Treating Snoring“, a significant proportion of snorers are actually exhibiting a symptom of the more serious underlying condition.

A study of the effect of noise on sleep has found that a snoring partner can raise a sleeper’s blood pressure by as much as a low-flying aircraft or a lorry reversing in the street.

Scientists who monitored 140 volunteers in their homes near Heathrow and three other European airports found the noises penetrating the bedroom had the same effect as those emanating from the neighbouring pillow.

Blood pressure went up in direct relation to noise loudness, by 0.66 mm Hg for every five-decibel increase, the researchers say in the European Heart Journal. The type of sound or its origin did not appear to be important. It was only the volume that mattered.

Lars Jarup, an author of the study from Imperial College London, said noise which disrupts sleep is not just an irritation.  It’s also a health risk.  Blood pressure is affected immediately and there is an increased risk of hypertension.

‘Simple snoring’ is a relatively easy condition to treat.  The dentists in our clinics are experts in the field of ‘oral appliance therapy’ (OAT) which involves the custom making of specialised dental devices that sit comfortably in the mouth and hold the lower jaw and connected tissues clear of the airway while asleep.

For more information on treatments for snoring and apnoea, visit our website at www.SleepTherapyClinic.com

Snoring Is A Danger Signal

Here’s a lesson for everyone…

NEVER presume snoring is harmless.  In a study published in the Journal of Laryngology & Otology, 31 people who believed they were ’simple snorers’ underwent overnight polysomnograms (diagnostic sleep studies) to determine the real nature of their condition.

The sleep studies found that only two were actually ’simple snorers’.

Given that it is virtually impossible to determine whether OSA exists without conducting a sleep study, and given the serious consquences of OSA, the study clearly demonstrates why snoring must not be ignored.

Any form of sleep disordered breathing is serious — and snoring is a ‘red flag’ which calls for further attention.  If you snore, or know someone who does, at least arrange a diagnostic sleep study so that, at the very least, you can rule out the possibility of a more serious condition.

The results of the study also highlight why sleep studies must form part of the assessment and treatment pathway even for supposed ’simple snoring’.   As the old saying goes, “Prescription without diagnosis is malpractice.”  Organisations which offer ‘treatments’ for snoring without first doing a study are in breach of numerous practice parameters and ethical standards.

For more information on the causes, effects and treatments for snoring and apnoea, visit The Sleep Therapy Clinic website at http://www.SleepTherapyClinic.com

According to a report on Channel 7 News, doctors have warned that one in three Australians are facing serious health problems because of snoring.

Experts have been told the risks include high blood pressure, heart disease, stroke and now, diabetes. The news report said:

"Norm Mareko used to fall asleep during the day, unexpectedly, even behind the wheel, and was recently diagnosed with sleep apnoea.

“I didn’t realise I had this condition until i had a car accident,” he said.

“I stopped breathing 36 times in one hour.”

Sleep apnoea has already been linked to high blood pressure, heart disease, stroke and now diabetes has been added to the list.

“People have known about snoring and laughed about it for centuries. In fact that is one of the impediments to us getting people to realise this is a serious condition,” said sleep disorders expert Professor Colin Sullivan.

The problem is sleep disorders have been so overlooked and many doctors dismiss snoring as a potentially serious health issue. However one in three Australians could end up needing hospital treatment if they leave their snoring unchecked.

And the experts are concerned about the broader consequences.

Professor Paul Zimmet from the International Diabetes Institute said: “The health bill of Australia will go up and up and up and type 2 diabetes and obesity and sleep disturbances will bankrupt the economy.”

Snoring As Bad For Heart As Smoking

According to Shari Angel Newman, the manager of sleep services for Spartanburg Regional Healthcare System, “Snoring is as much of a risk for heart attack as heavy smoking.” Find the full article at: http://www.goupstate.com/apps/pbcs.dll/article?AID=/20070218/NEWS/702180306/-1/LIFE

In the “don’t knock it if it works” category comes this report (from an anonymous contributor) of how their snoring was reduced by wearing a wrist band which is worn over an acupuncture / acupressure point.

Unfortunately there is absolutely no research (or medical / biological explanation) which goes close to explaining how pressure on the wrist could keep excessive or floppy tissue in the upper airway from vibrating as air flows over it, or collapsing altogether in the case of apnoea/apnea sufferers.

If anyone has had any experience with similar solutions, please let us know about it.

Snoring. It's Your Parents' Fault

A recent study of 700 children has found that children of parents who snore are three times more likely to snore themselves.  Furthermore, these children may be at increased risk of developing behavioral problems such as ADHD (attention deficit hyperactivity disorder) and other snoring-associated health problems.

The study has been published in Chest, the journal of respiratory and critical care medicine.  Researchers say studies suggest that frequent snoring can lead to behavioral problems, cognitive deficits, and heart disease.  (See other posts on this blog for more details.)

Snoring is also a common symptom of obstructive sleep apnoea / apnea, and researchers say children who snore frequently should be evaluated by a sleep specialist.

Snoring A Predictor For Heart Disease

Snoring has been identified as a predictor for heart disease, according to a British study of more than 4,000 adult males.  The study found that habitual snoring is a determinant of risk of ischaemic heart disease and stroke.  Adjustment for age, body mass index, history of hypertension, smoking, and alcohol use did not significantly decrease the relative risks.  The research article can be found at:

Bottom line:  snoring (or any form of sleep disordered breathing) is serious.  It should always be treated, not tolerated.  For more information on the professional treatments available for snoring and apnoea, click here.

Previous All posts Next Page